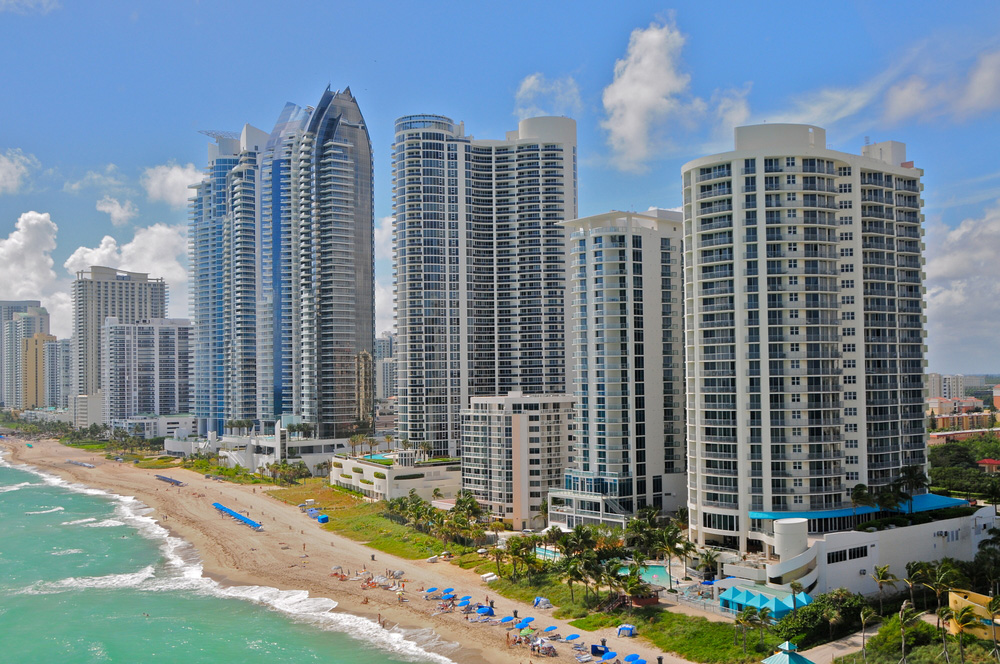 Capital, particularly foreign investment, continues to rain buckets in Miami (do they make a poncho for
that?) and put a squeeze on cap rates. The big question: Will it last? That’s why we’re excited to hold our
annual Miami State of the Market event on Sept. 24 at the Intercontinental Miami, where expert
panelists will give their forecasts.

Hunt Mortgage Group SVP Marc Suarez, who’s speaking, tells us that the investment environment
will hold strong as long as there’s foreign “flight capital”—money looking for a more hospitable home in
the US. These days, flight capital is chasing yield, as opposed to capital preservation, and so South
Florida multifamily will continue to see cap rate compression. In particular, these investors
are aggressively snapping up existing garden-style, suburban multifamily, he says. That’s good for
existing owners, who are also taking advantage of low interest rates and aggressive lending
parameters that allow cash out or return of equity.

As far as development goes, Marc says it’ll be tough to see more rental multifamily development beyond
the current permit-phase pipeline. There will be some affordable housing and tax credit deals, mostly
urban infill, but that’s about it. The reason is simple enough: condo developers are offering land sellers
sweeter deals than apartment developers generally can. “For the most part, South Florida has been and
will be a condo market in the core markets,” he says. Pictured: one of the area’s recent condo
projects, Residences by Armani/Casa.

Whether condo or apartment, the buildings are going to be built. Plaza Construction Group FL
president Brad Meltzer, who’s also speaking, tells us that construction volume will continue to grow in
South Florida in the next 12 to 24 months. (He’s pictured above, left, donating $100k to the Intrepid Fallen
Heroes Fund in April.) Projects in both design and pre-construction phases appear to be moving
forward as scheduled, and there’s certainly no concern for overbuilding as long as the wave of
investors—including both international flight capital and domestic buyers, particularly from
the Northeast—keep coming. Plaza’s been working on a number of local projects, including 1 Hotel &
Homes South Beach and NINE at Mary Brickell Village. To hear even more, join us for our event.
Great networking too! Register here.

What You Don’t Know About Christian Driussi

Position: VP of the 32-story Brickell Bay Office Tower in the Brickell Financial District.
Background: Born and raised in Italy, moved to the US after graduation from university. Called Miami
home for the last 15 years.
Family life: Married with three kids, living the American Dream.
Recent projects: Brought Brickell Bay Office Tower to over 90% occupancy (and has maintained an
above-90% occupancy rate for the last several years). He also opened a soccer facility in Brickell
called Soccer Cage Miami, as well as a Soccer Academy for kids aged 5 to 17.
Favorite song: Andrea Bocelli’s “Caruso.”
Favorite vacation: “Every vacation is an experience that opens your mind and changes your vision of
the world. I don’t really have one favorite because I’ve been lucky enough to see amazing places and
meet extraordinary people from different countries, cultures, and religions.”
Favorite food: Homemade risotto with porcini mushrooms. It’s not an easy dish to prepare, he says,
but after many years, he recently made it for some friends and it came out “pretty delicious.”
Startling fact: He’s a huge soccer fan and has had the chance to meet and play with some of the
greatest soccer players in the world. “But the day that David Beckham came to Soccer Cage Miami and
congratulated me for creating it (pictured above), I definitely touched soccer heaven.”

The Latest in the East Las Olas Isles Condo Rush

Snapped at the topping off of AquaVita recently: Debby and Dennis Eisinger; and Jean Francois and Diane Roy. Jean Francois, president of Ocean Land Investments, and his long-time business partner Dennis, are developing AquaVita as the first of five condo projects they plan on East Las Olas Isles. On schedule to open in March ’15, the five-story building features 22 residences with open floor plans, boat slips, and outdoor spaces for entertaining or relaxing. Because the building has sold so quickly, Dennis says, the developers have launched sales for their next three projects, AquaLuna, AquaMar, and AquaBlu.

Who’s Coming Out Swinging in the Developer Wars?

Miami may be full on sunshine, but it’s currently experiencing the perfect storm: falling vacancy and rising rents. Cushman & Wakefield senior leasing director Jon Blunk (third from left, with C&W’s Gordon Messinger, Gian Rodriguez, and Crocker Partners’ Angelo Bianco) says it’s due to there turn of the condo developer, who’s back full throttle with a taste for the iconic and the fabulous. Developers are battling it out for top-tier space sites, with companies (especially law firms) wanting a presence (and an unduplicated view) in the city. It also helps that the peak prices of ’06 are back. Jon leases for Crocker Partners, which owns the two largest buildings downtown: Miami Center and Suntrust International Center. Suntrust, at 90% leased and loaded with Fortune 500 tenants, is being renovated so it can compete with the newer product by 2015. For more info on our sponsor, click here.

How South Florida Ranks For Livability

Livability.com released its Top 100 Most Livable Cities in America, evaluating more than 2,000 mid-sized and small cities (sorry, Miami, not you) and ranked them in eight categories: economics, housing, amenities, infrastructure, demographics, social and civic capital, education, and healthcare. Miami Beach came in at No. 38 and Coral Gables just made it on the list at No. 100. Other Florida cities on the list are Tampa (No. 71) and Orlando (No. 86). Madison, Wis., topped the list, though we think it’s a wee bit cold up there.

YOU TELL US: Is Wearable Tech the Future of CRE?

Each time Apple unveils a gadget, people flip out: grown men cry, old devices are ritualistically sacrificed, and everyone in the world is forced to listen to U2. We know commercial real estate folks love their gadgets, but will wearable tech—like the new Apple Watch or Google Glass— blossom in our industry? Click our poll to the left to give us your thoughts, and read our latest issue of Real Estate
Bisnow National to learn the pros and cons of wearable teach in real estate.

Don’t Miss Our Miami State of the Market Event!